All source code is in the Drums directory of the GitHub repo.

This is not a MIDI sequencer or anything similar; it’s purely for fetching and manipulating information from Roland V-Drum kits.

I’m very grateful to Roland for providing the TD-17 MIDI implementation document which has been absolutely vital in writing this code.

Feedback is very welcome - it’s still early days, but please email skeet@pobox.com or file an issue to let me know how you get on with this.

As of 1.0.0-alpha02, there’s a Windows installer. Download the latest installer above, or from the releases on GitHub. If you use GitHub, you’ll need to expand the “Assets” part of the given release. If you’d prefer not to run the installer, there’s a zip file as well.

The application that’s installed is called “V-Drum Explorer”; if you’re using the zip file, you want to run VDrumExplorer.Wpf.exe.

If Windows SmartScreen gives a warning, click on “More Info”, check that it is signed by me (“Jonathan Skeet”) and then choose the option to run it.

The USB Driver Mode must be “vendor” for the V-Drum Explorer to detect it. The “generic” USB mode is the factory default, so you’ll need to change this (which includes a drum kit reboot) before starting the Explorer.

Additionally, in MIDI settings, the “Receive Exclusive” option must be set to “On”.

There are four windows in the application:

When the application is launched, the Module Loader will be shown.

This window should be left open; closing it will close all other windows. It also contains the log which can be saved to disk and then included when filing an issue 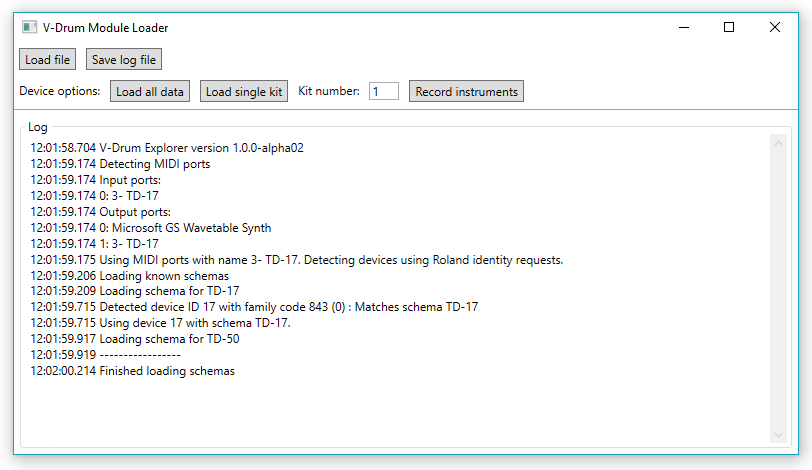 The log will include diagnostics as the application attempts to detect a drum module. In the screenshot above, it’s detected my TD-17. If no known module is detected, the second row of buttons will be disabled.

Even without a drum module, you can still load and save files, and edit the data.

Click on “Load file” to load a file. The application will detect whether it contains data for a whole module or a single kit, or instrument audio, and display the appropriate window, as described later. A sample file (td17.vdrum) is provided with the application. (If you run the Windows installer, the file is installed in ‘Program Files (x86)\VDrumExplorer’ - I know that’s a little odd as it isn’t a binary, but it simplifies things while I’m learning about Windows installers and WiX.)

Click on “Save log file” to simply save the contents of the log (as displayed in the Module Loader) to a text file. This is primarily to make it easy to report issues. Note that this single log is used for all logging, including for log entries created by other windows.

“Live” functionality (drum module on and connected via USB)

If a module is detected, you can load data from it with the two buttons in the second row:

When loading a single kit, the value in the “Kit number” textbox should be an integer between 1 and 100. (If other modules are ever supported, this range may vary.)

Loading a single kit is reasonably quick - a few seconds - but loading the complete module data takes about three minutes for the TD-17, and longer for the TD-27 or TD-50. You’ll see a progress dialog like this: 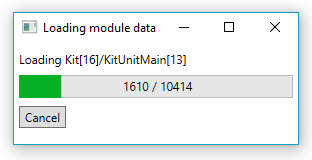 You can cancel at any time, but I strongly recommend that if you wait until the complete module data has loaded, you then save it to a file so you can load that next time.

The Module Explorer allows you to view and edit almost all the data in a module. (There are some aspects that aren’t available, such as sample data.)

Information is presented in a tree view, with details of the currently selected tree node in a panel on the right hand side. Initially, the explorer is in read-only mode. 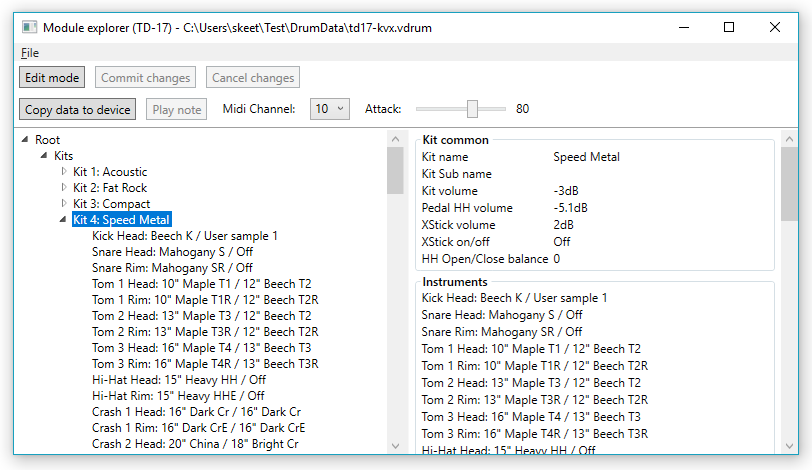 If no drum module was detected when the application was loaded, or if the module isn’t the same as the source of the data being shown in the explorer (e.g. you have a TD-17 but you’re exploring TD-50 data), the second row of buttons will not be present.

Click “edit mode” to enable editing. You stay in edit mode even if you change tree nodes, so you can edit multiple aspects at a time. 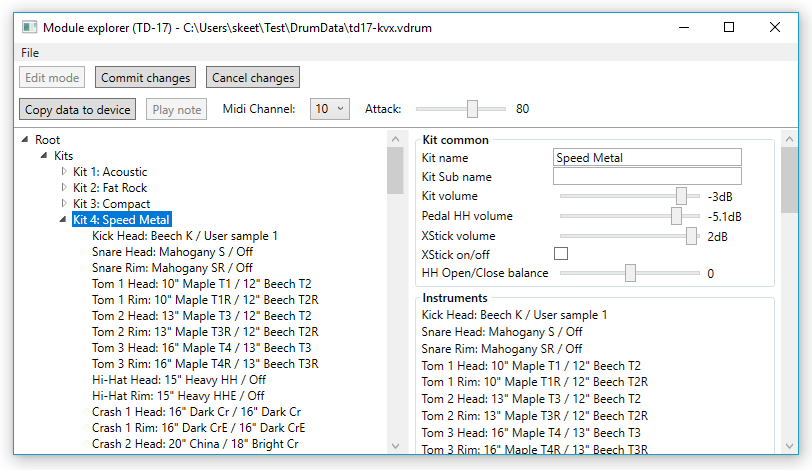 It’s important to understand that when you’re in edit mode, you’re only editing the data in memory. Nothing is automatically saved to a file, or copied to the physical drum module. Those actions have to be taken explicitly.

When a drum module is connected and an instrument is selected, the “Play note” button is enabled. This is intended to provide a convenient way of experimenting with the settings you’re editing, but its functionality is fairly crude: it just tells the module to play the selected instrument, as specified in the MIDI settings for the kit.

Use the “attack” slider to simulate hitting the drum hard or softly.

If you don’t hear anything, check the MIDI channel used by your module. The application defaults to 10, which is the default channel for the TD-17.

Copying data to the device

The “Copy data to device” button will copy all the information from the currently selected tree node and all child nodes, onto the device. This can be very quick if you’re copying a single instrument; copying a whole kit takes a bit longer. Copying the entire module data (from “Root” downwards) will take a very long time.

Note that in edit mode, the data copied is what you currently see, including any changes you’ve made.

Right-clicking on a the root node of a kit within the tree will open a context menu like this: 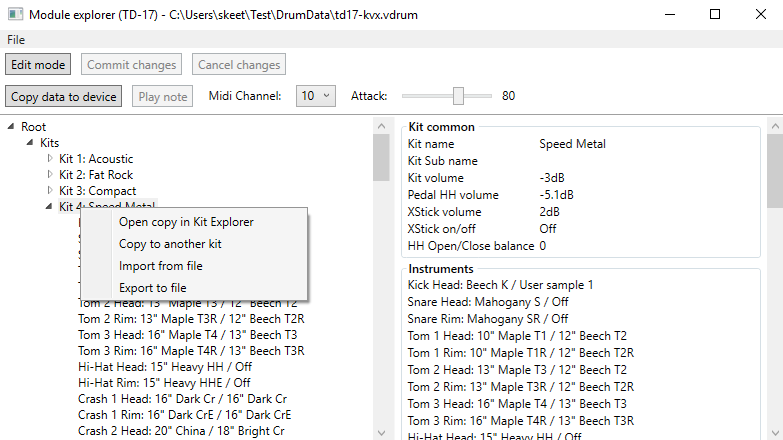 For the second of these options, a dialog box opens asking you which kit you would like to copy the selected one to: 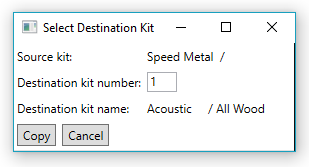 The File/Save menu item allows you to save the whole module data to a .vdrum file, which can be opened later in Module Loader.

Kit Explorer works very similarly to Module Explorer, except it operates on a single kit instead of the data for a whole module. 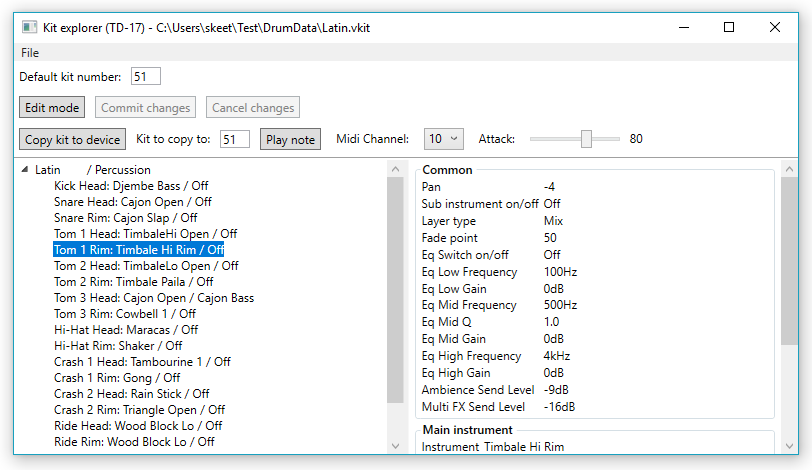 Copying the kit to the device

The “Copy kit to device” button will copy the kit data to the kit specified in the textbox. (This must be a valid kit number for your module.) In Kit Explorer, the whole kit data is always copied, rather than just information from the selected tree node.

A kit file has a “default kit number” which is used to populate this textbox on loading. This number starts off as the original kit that was taken from the module, but can be modified with the “Default kit number” textbox. Typically you’d want to set it to the number that you most often use on the device for that kit.

The File/Save menu item allows you to save the kit to a .vkit file, which can be opened later in Module Loader.

Playing an instrument within the Kit Explorer or Module Explorer requires you to have the module connected, with the right instrument on the currently selected kit. That makes it hard to edit a kit on the move, unless you know exactly what each instrument sounds like.

V-Drum Explorer allows you to record all the instruments from your module via the audio connection to your computer, save the data to a file, then load the file again later to allow you to play each instrument without the module being present.

To take advantage of this functionality, first you need to record the audio data. Start V-Drum Explorer with the module connected and turned on, then click on “Record instruments” in the Module Loader.

The instrument recording dialog will be displayed: 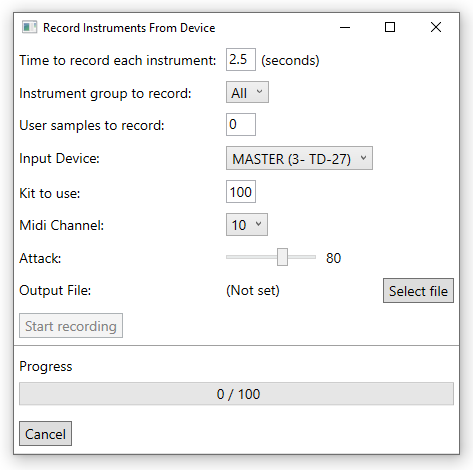 Before recording, there are some things to check:

Once you’re ready, click “Start recording”. Importantly, you need to leave the drum set alone at this point: if you change settings on the module, or strike the pads, you could end up with undesirable results.

Note: Recording all the samples takes a long time, particularly on the TD-50 with over 400 instruments or the TD-27 with over 750! As well as the recording time itself, there’s a little overhead while the instrument is changed etc. So on a TD-50, recording 2.5s of audio per instrument could take over 20 minutes. Please be patient! (The progress bar will show you how it’s doing, of course.)

The process works as follows:

The last part about data restoration can fail in some situations - for example if you disconnect the USB cable while recording. For this reason, I recommend backing up the kit first if you’ve made any modifications to it, or (preferably) using a kit you haven’t modified.

When recording is complete, the dialog will close automatically. 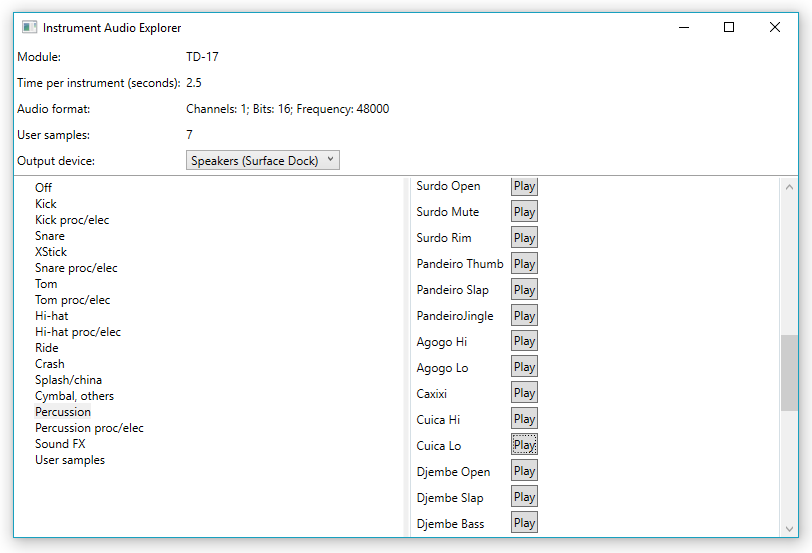 Select an output device from the drop-down (“Speakers (Surface Dock)” in the screenshot above) and then click on one of the instrument groups on the left hand side. The recorded instruments will be shown on the right hand side, with Play buttons. Clicking on a Play button will play the recorded sample from the file.

Note that you can have an Instrument Audio Explorer window open at the same time as a Kit Explorer or Module Explorer window, and this is the recommended approach if you’re trying to work out which instruments to include in a new kit.

Quality note: When developing the feature, some recordings ended up being cut off when playing back. This is definitely a problem with the recording side rather than the playback side. I believe I’ve fixed it, but I can’t be sure. It’s most noticeable on percussion and sound FX instruments. If you run into this problem, please let me know (skeet@pobox.com) - you may well find that just re-recording the file fixes it, but I’d like to know anyway. (And apologies in advance.)

This is the first version with a complete new user interface implementation. While much of it looks the same as previous versions, it’s all changed under the hood - which means there may well be some bugs lurking. On the other hand, there are plenty of new features too:

There are some known schema issues in the TD-27 schema which are addressed in the new codebase but not here (as keeping track of things in both places is really tricky).

This is likely to be the last release of the “old” code, as the “new” code is approaching feature parity.